Founded in 1965, the Gold Medal Awards program honors communities in the U.S. that demonstrate excellence in parks and recreation through long-range planning, resource management, volunteerism, environmental stewardship, program development, professional development and agency recognition. Applications are separated into seven classes, with five classes based on population, one class for armed forces recreation and one class for state park systems awarded on odd numbered years. 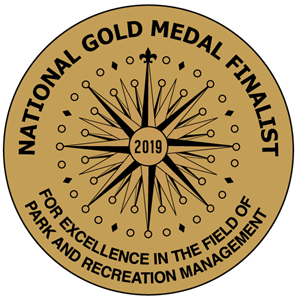 Agencies are judged on their ability to address the needs of those they serve through the collective energies of community members, staff, and elected officials. Rolling Meadows Park District joins three other finalists in their class that will compete for grand honors this year.

"It's fantastic to be selected as a finalist for the NRPA Gold Medal Award "said Board Vice-President Bill Cooley. " The Board greatly appreciates the amazing staff, affiliate groups, community volunteers, and participants that have helped us to stand out as an outstanding agency."

A panel of five park and recreation professionals reviews and judges all application materials. Judges are chosen for their considerable experience and knowledge in parks and recreation on both the local and national levels.

This year's finalists will compete for Grand Plaque Award honors this summer, and the seven Grand Plaque recipients will be announced live during the NRPA General Session at the 2019 NRPA Annual Conference in Baltimore, Maryland, Sept. 24-26, 2019.

For more information on the Gold Medal Awards, visit www.nrpa.org/goldmedal or www.aapra.org.